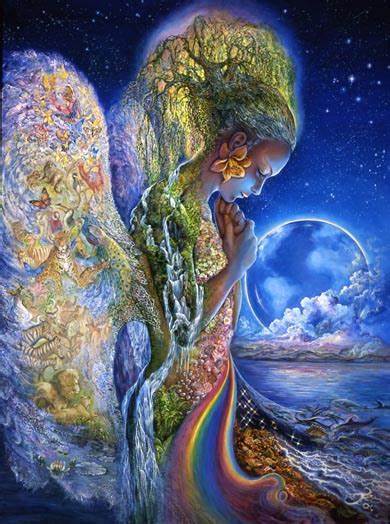 Gaia was known as the life force from which all other beings sprang, including the earth, the sea and the mountains. A prominent figure in Greek mythology, Gaia is also honored by many Wiccans and Pagans today as the earth mother herself.

In Greek mythology, Gaea (or Gaia), the primordial earth or mother goddess was one of the deities who governed the universe before THE TITANS existed.

In the creation myth, CHAOS came before everything else. He was made of Void, Mass and Darkness in confusion; and then earth in the form of Gaea came into existence. From “Mother Earth” sprang the starry heavens, in the shape of the sky God Uranus, and from Gaea also came the mountains, plains, seas and rivers that make up the Earth we know today.

Gaea first appears as a character of divine being in the Homeric poems, in the Illiad, black sheep were sacrificed to her, and people were declaring oaths to invoke her.

The Greek Historian Hesiod wrote that the union of Gaea and Chaos created Uranus. From there Gaea and Uranus gave birth to the Giants, the Titans, Oceanus and the whole world. Uranus decided to stop Gaea from creating anything else and sent his children inside her, imprisoning them in her womb, therefore infuriating Gaea and causing her allegiance to her Titan son Cronus, and together they overthrew Uranus.

CRONUS, using a great iron sickle created by his mother attacked Uranus, castrating him, the drops of blood fell from him and onto Gaea, the earth, and became the seeds of the Erinyes (the spirits of punishments), the Gigantes and the Melian nymphs. Another myth is that Cronus threw Uranus organs into the ocean and the mixing of the blood and sea foam birthed Aphrodite.

Gaea’s allegiance switched to ZEUS due to the cruelty of Cronus, who had imprisoned the same sons and had an insatiable endless determination for domination. Gaea foretold a prophecy that one of Cronus’s sons would dethrone him, due to his distrust; Cronus swallowed each of his children whole to prevent a coup. Zeus was successfully hidden, and when he was older, he returned to his father, forced him to throw up his siblings and together they overthrew him.

Zeus’s toppling of Cronus marked the end of the age of the Titans. Gaea would not be without conflict with Zeus; she was angered by his binding of her Titan sons in Tartarus, so she birthed the tribe of Giants and later the monster Typhoeus (a storm giant) to overthrow Zeus though both were unsuccessful. Her final attempt to dethrone Zeus was by telling him that his next son, birthed to him by Metis would depose him, so he swallowed her causing ATHENA to spring from his head.

Other versions show Gaea was the great mother of all creation; the heavenly gods were descended from her union with Uranus (the Sky), the sea-gods from her union with Pontos (the Sea), the Giants from her mating with Tartarus (the Pit) and mortal creatures born from her earthly flesh. In ancient Greek cosmology, the earth was believed to be a flat disk, encircled by the River and encompassed by the heaven on one side and Tartarus on the other. In a Greek vase painting Gaea was portrayed as a buxom, motherly figure rising from the earth but inseparable from her element. In some mosaic artworks, Gaea is a full figured woman, reclining on the land, clothed in green and surrounded by fruits and the Seasons.

Gaea was the source from which arose the vapours producing divine inspiration and was regarded as an oracular divinity and was said to have had the oracle of Delphi in her possession first.

Gaea was seen was the all-producing and all- nourishing mother; her worship universal amongst the Ancient Greeks.

She had temples at Athens, Sparta, Delphi, Olympia, Bura, Tegea and Phlyus to name a few. Due to her mother like presence she presided over marriages, oaths and was honoured as a prophetess.

Other Interesting Facts About Gaea

• Gaea may have formerly been worshipped in Greece as a mother goddess before the Hellenes introduced the cult of Zeus
• Gaea was described as the giver of dreams and the nourisher of plants and young children
• Gaea was renamed by the Romans as Terra
• In modern times, Earth scientist use the term Gaea to describe the earth as a complex living organism

Published on Greek Gods and Goddesses</