Your Egyptian Tarot Card for Today 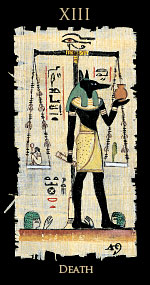 Death is the end of the old and the beginning of the new. You sometimes place finality on Death that is human conjecture, not fact. Death only appears final to those who view human existences as the ultimate awareness. For that to be true, humans would have to be the center of the Universe and they are not. Embrace Death as a part of life and you will get much more out of it. Death doesn’t end anything, but it does change everything.