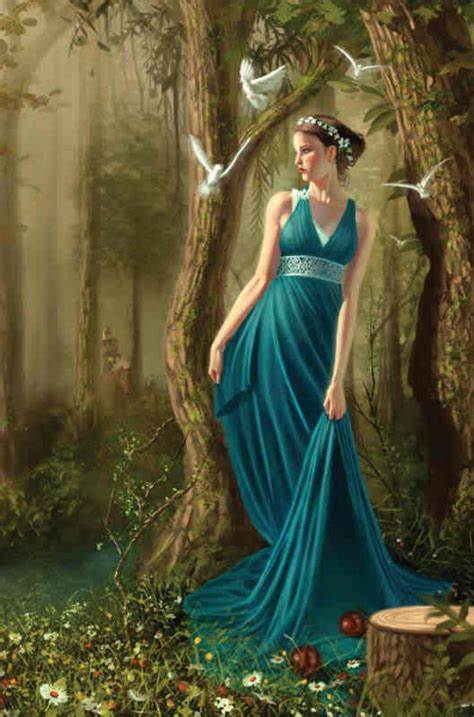 Demeter is one of the best known goddesses of the harvest. When her daughter Persephone was kidnapped and seduced by Hades, Demeter went straight to the bowels of the Underworld to rescue her lost child. Their legend has persisted for millennia as a way of explaining the changing of the seasons and the death of the earth each fall.

Demeter, the middle daughter of Cronus and Rhea, was the Ancient Greek goddess of grain and agriculture, one of the original Twelve Olympians. Her grief over her daughter Persephone – who has to spend one-third of the year with her husband Hades in the Underworld – is the reason why there is winter; her joy when she gets her back coincides with the fertile spring and summer months. Demeter and Persephonewere the central figures of the Eleusinian Mysteries, the most famous secret religious festival in Ancient Greece.

Demeter’s name consists of two parts, the second of which (-meter) is almost invariably linked with the meaning “mother,” which conveniently fits with Demeter’s role as a mother-goddess. However, there are still debates over the meaning of the first part (De-), which most scholars associate with “Ge,” i.e., Gaea (making Demeter “Mother Earth”); others, however, prefer to link it with “Deo,” which is a surviving epithet of Demeter and may have been, in an earlier form, the name of one of few grains.

Demeter is usually portrayed as a fully-clothed and matronly-looking woman, either enthroned and regally seated or proudly standing with an extended hand. Sometimes she is depicted riding a chariot containing her daughter Persephone, who is almost always in her vicinity. The goddesses – as they were endearingly called – even share the same attributes and symbols: scepter, cornucopia, ears of corn, a sheaf of wheat, torch, and occasionally, a crown of flowers.

Demeter was known mostly as the Giver of Food and Grain, or “She of the Grain,” for short (Sito). However, since she presided over something as vital as the cycles of plants and seasons, the Ancient Greeks also referred to her as Tesmophoros, or “The Bringer of Laws,” and organized a women-only festival called Tesmophoria to celebrate her as such. Other epithets include: “Green,” “The Giver of Gifts,” “The Bearer of Food,” and “Great Mother.”

Demeter was one of the six children of Cronus and Rhea, their middle daughter, and their second child overall – born after Hestia, but before Heraand her brothers: Hades, Poseidon, and Zeus. Just like all of her siblings, she was swallowed and later, following an intervention by Zeus, regurgitated by her father.

Demeter didn’t have many partners and was rarely portrayed with a male consort. The mortal Iasion and her brothers Poseidon and Zeus are the most noteworthy – if not the only – exceptions.

Early in her life, Demeter fell in love with a mortal named Iasion. She seduced him at the marriage of Cadmus and Harmonia and lay with him in a thrice-plowed field. Zeus didn’t think appropriate for such a respected goddess to have a relationship with a mortal, so he struck Iasion with a thunderbolt. But, by then, Demeter was already pregnant with twins: Ploutos and Philomelus, the former the god of wealth, and the latter, the patron of plowing.

Next, Demeter’s brother Poseidon forced himself upon her (once transformed into a stallion), and the goddess, once again, became pregnant with two children: Despoena, a nymph, and Arion, a talking horse.

The Abduction of Persephone

Hades, the Lord of the Underworld, fell in love with Demeter’s virgin-daughter and decided to take her into marriage. So, one day, as she was gathering flowers with her girlfriends, he lured her aside using a fragrant and inexpressibly beautiful narcissus, and then snatched her up with his chariot, suddenly darting out of a chasm under her feet.

Inconsolable, Demeter walked the earth far and wide for nine days to find her daughter – but to no avail. And then, on the tenth day, Hecate told her what she had seen and Helios, the All-Seeing God of the Sun, confirmed her story. Demeter wasn’t just brokenhearted anymore. She was now angry as well. And with everybody! Especially with Zeus who, the rumors claimed so, had approved the whole operation and even aided Hades throughout.

The Institution of the Eleusinian Mysteries · Iambe, Demophon, and Metanira

So, Demeter left Mount Olympus and went to grieve her daughter among the mortals, disguised as an old woman. She ended up at the court of King Celeus of Eleusis, where his wife Metanira hired her to be the nurse to her baby son, Demophon. Iambe, the old servant woman of the house, cheered her with her jokes, and Demeter laughed for the first time in many weeks. In gratitude for the kindness, Demeter devised a plan to make Demophon immortal, so she started bathing him in fire each night, thus, burning away his mortality.

However, one day, Metanira witnessed the ritual and, not realizing what was happening, started screaming in panic and alarm. This disturbed Demeter’s strategy, so she revealed herself at once and told Metanira that the only way that the Eleusinians will ever win her kindness back is by building a temple and establishing a festival in her glory.

The Return of Persephone and the Establishment of the Cycles

King Celeus did just that, and Demeter spent a whole year living in her newly built temple, grieving, and, in her grief, neglecting all her duties as a goddess of fertility and agriculture. As a consequence, the earth turned barren, and people started dying out of hunger. After unsuccessfully sending all the gods, one by one, to Demeter with gifts and pleas, Zeus realized that he would have to bring Persephone back to her mother if he didn’t want to see humanity wiped out from the planet.

So, he sent Hermes to Hades, and the divine messenger fetched back Persephone to her mother. However, the gods soon realized that Demeter’s daughter had already eaten one seed of pomegranate in the Underworld, which obliged her to remain in the Underworld. Knowing that Demeterwouldn’t allow such thing to happen, Zeus proposed a compromise: Persephone would spend one-third of the year with Hades and the other two-thirds with Demeter.

The former, the period during which Demeter is grieving, corresponds to the winter months of the year when the earth is infertile and bare; the latter, when she rejoices, overlaps with the abundant months of our springs and summers. The myth likewise explains the growth cycle of the plants. The grain, just like Persephone, must die and be buried under the earth in order to bear much fruit above it.

The best sources for the principal myth of Demeter are the “Second Homeric Hymn,” and the fifth book of Ovid’s “Metamorphoses,” where, naturally, the names of the main protagonists are changed to their Roman counterparts: Ceres, Pluto, and Proserpine.